The ED9 earphone is not just an exaggeration. All three frequency ranges are balanced. Treble is smooth, mids are not crowded and bass is not boomy. With provided sound tuning nozzles, allowed users to tune the sound to their desire. Shining silver surface, simple and textured. 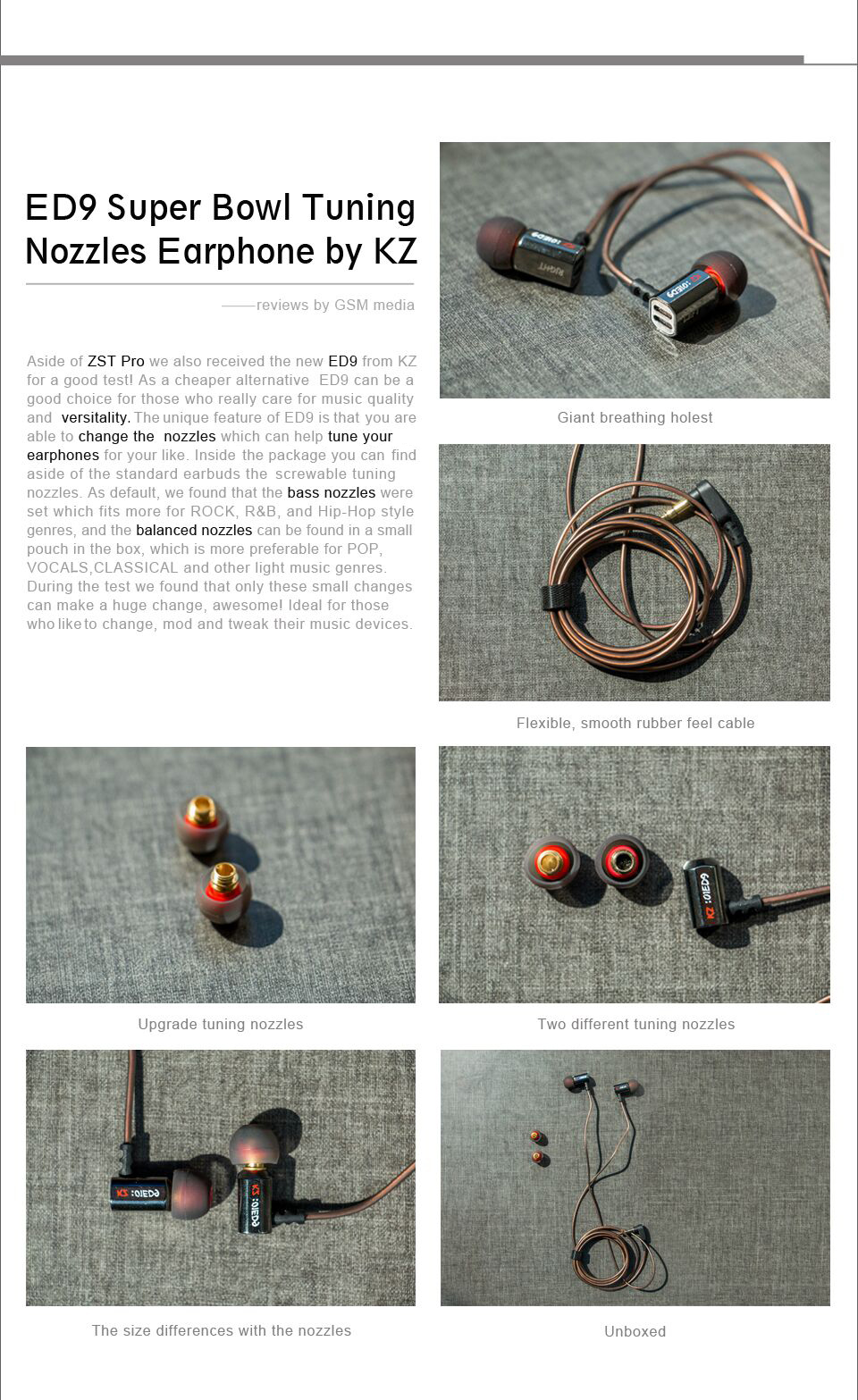 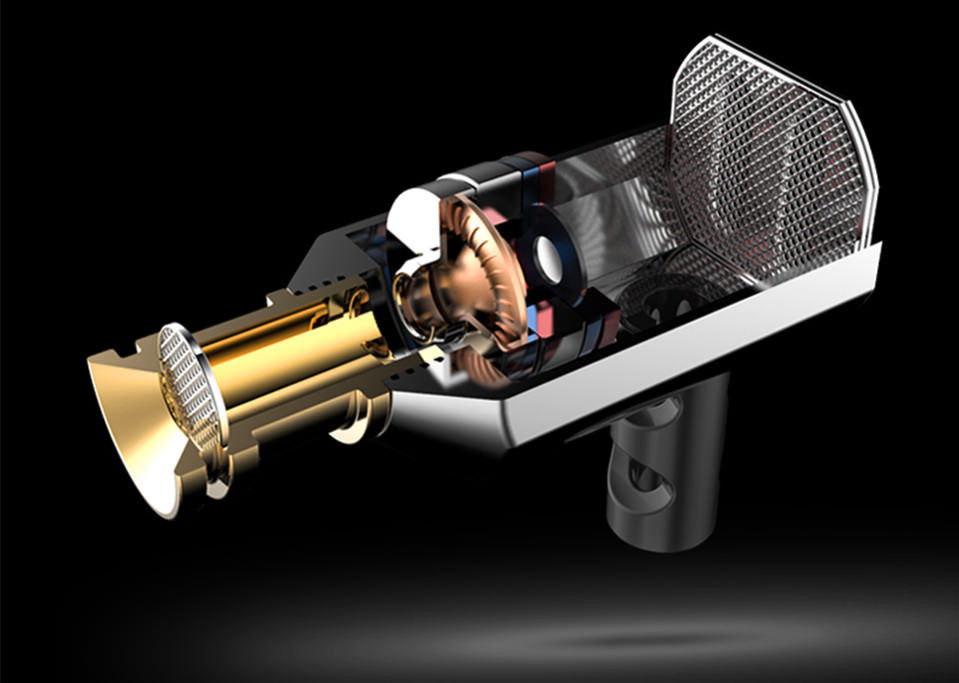 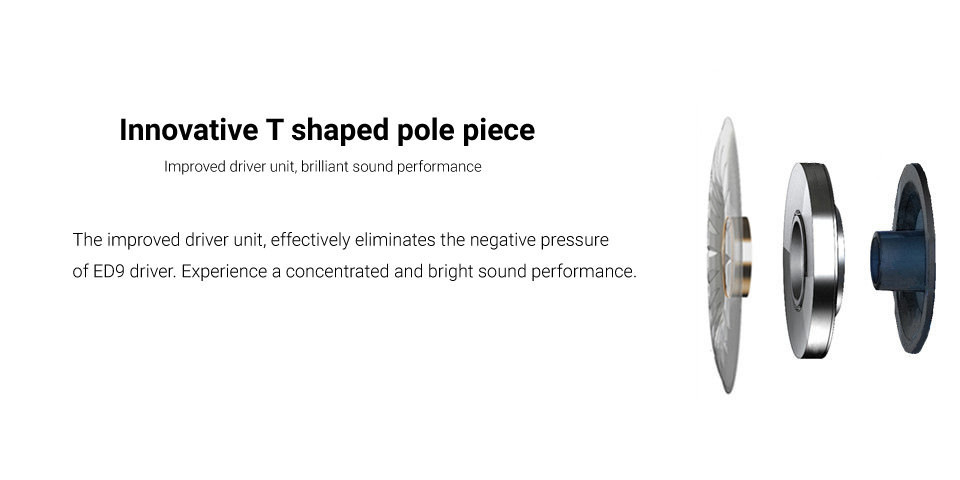 In traditional driver the interior is not closely bound, causing the sound to be less coherent and bright. The built in magent will cause the driver diaphragm sag down over time, worsening the sound.
The all new driver unit effectively eliminates the negative pressure in driver, providing clear, soft feel of sound and better extension of vocals. 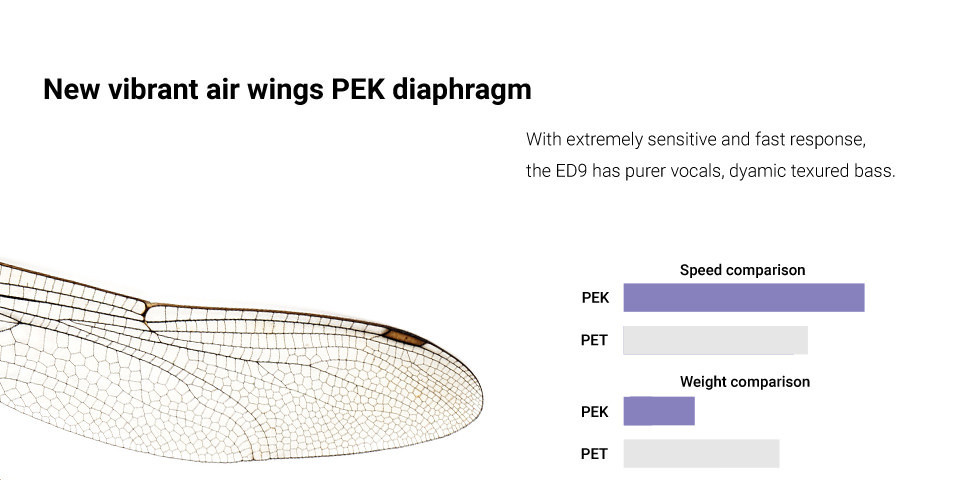 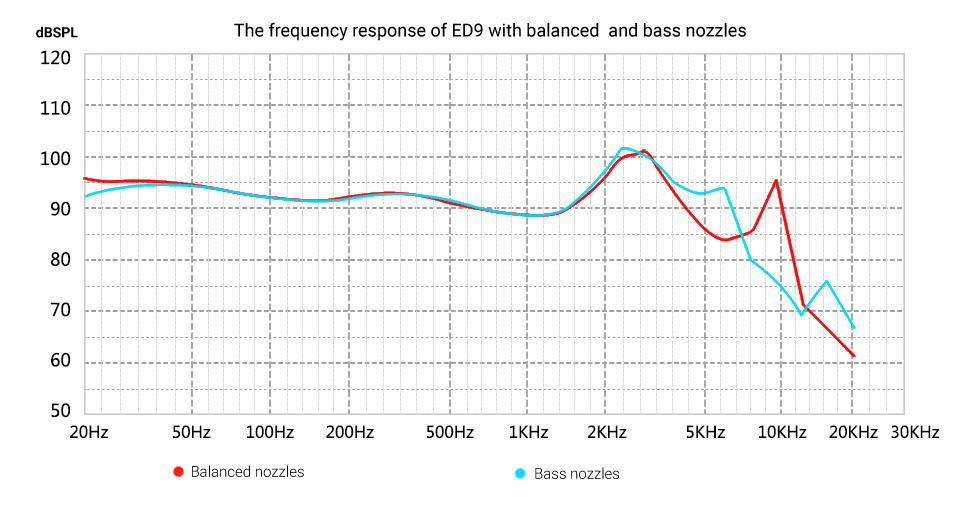 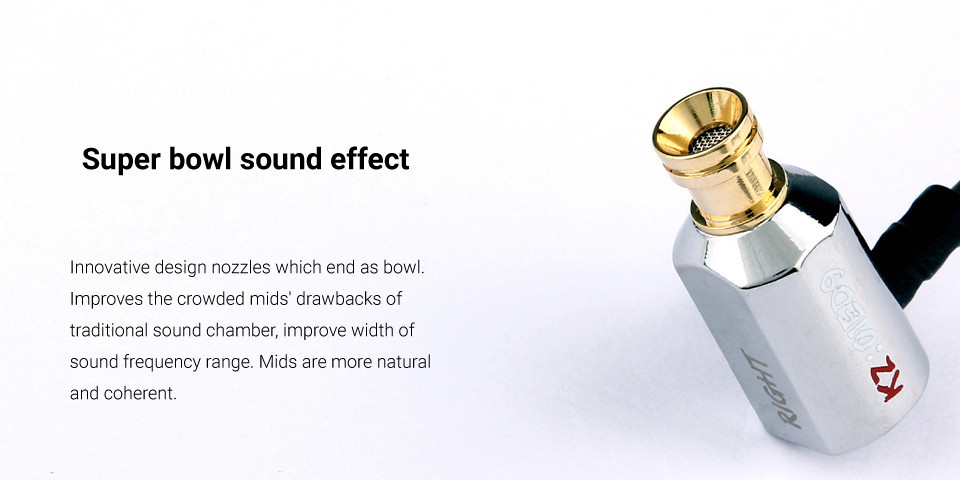 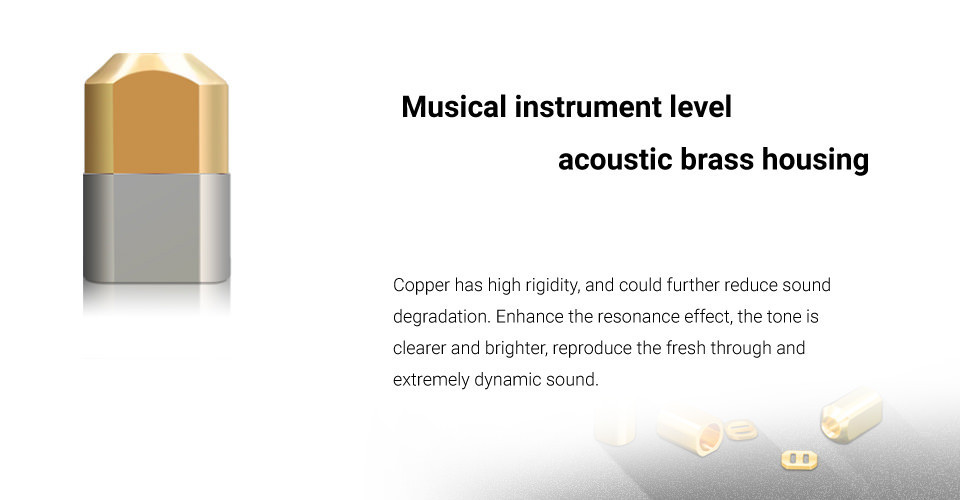 Many musical instruments are made of copper. Copper has high rigidity, and could further reduce sound degradation. Enhance the resonance effect, the tone is clearer and brighter, reproduce the fresh thorough and extremely dynamic sound. 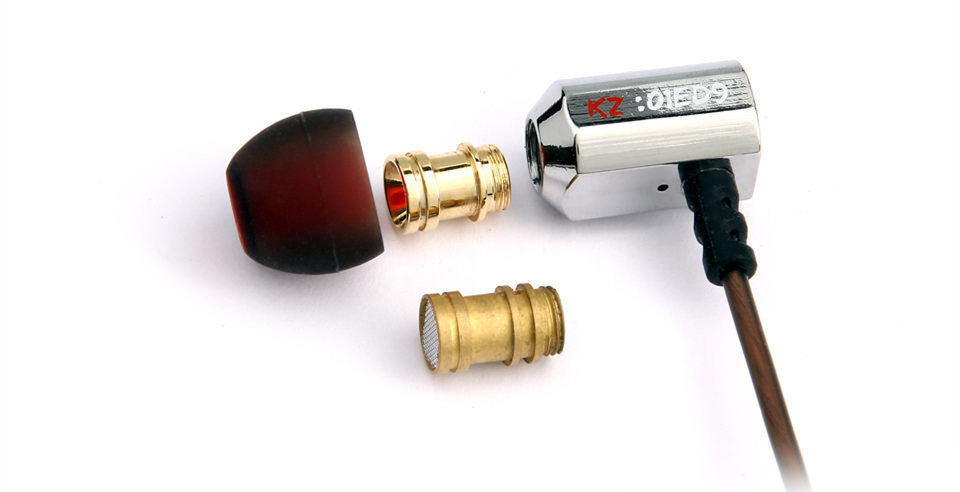 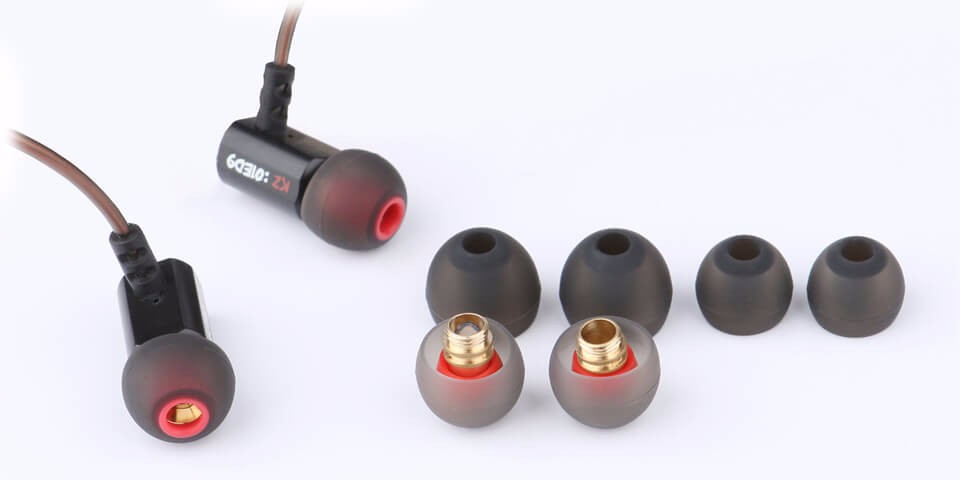 Arrived in a small plastic box, it had a very basic cover graphics and a detailed spec on the back. Under the cover it had a nice display presentation with a foam cutout and ED9 inside of it. Though it was minimalistic, for such low price KZ actually included a set of 3 hybrid eartips (S/M/L, hybrid design with a red core) and a set of 2 filters! Yes, hard to believe but this design accommodates replaceable metal nozzle-filters that screw into the shell of headphones. And as a bonus there was an extra pair of hybrid eartips used as a "holder" for 2nd set of filters.

Now, more about ED9 design. Starting with a cable, this is something you wouldn’t expect from a "budget" IEM. It has a quality gold plated L-shaped connector with a nice strain relief. The multi-colored twisted wires are inside of a clear rubbery shielding which is soft and easy to manage without getting tangled too much. Y-splitter is small and rubbery with a nice strain relief around all 3 points of wire connection. Right side of the wire also has inline remote control with universal multi-function single button and mic right next to it. You don’t have to worry about compatibility of volume control (Android vs iOS) since those buttons are not present, but a single click Play/Pause/Call works flawlessly, and double-click skips to the next song with my Note 4.
The wire goes to a metal chrome plated shell and has a nice strain relief at the attachment as well. As you can see, a lot of thought went into the cable design and durability of every joint connection. The shell itself is very slick and has a little bit of weight to it. Considering that and a fact that you can only wear it wire down, you do need to pair it up with a set of eartips that give you not only the best seal but also a grip to hold these IEMs securely inside of your ears. The shell itself has multiple air vents including a pinhole next to the attached wire, the other one at the base of the nozzle filter, and two large wire mesh covered ports on the back of the shell. Combined, all this contributes to an open airy wide soundstage and at the same time a mediocre isolation. Also, top of each earpiece has a clearly spelled Left/Right marking. Microphonics effect was noticeable when cable brushed against my shirt, but it wasn’t too bad.

When it comes to a sound, let me reassure you that included two pairs of filters are not a gimmick. When you look closer, they have a very distinct design, a slight difference in length and finish (faded brass – neutral, shiny gold – bassy), and shiny gold nozzle-filter even has a foam insert filter. A difference was very noticeable between these two filters that definitely contributed to shaping of a sound signature. Moving forward, I will refer to "bronze" and "gold" in order to distinguish which filter I was using in my listening setup.

ED9 (bronze) has a neutral sound with slightly mid-forward signature. Overall it’s bright and detailed sound with a wide airy soundstage that also has a nice depth to it. Bass is neutral, tight, and punchy, with a good extension and characteristics of being able to hear it instead of feeling it. Mids are clear and bright, slightly forward which could be an artifact of my perception. I would also say that mids are a bit on a thin side, almost close to analytical in nature, but not harsh. Treble is crisp and bright, and with a nice extension.

ED9 (gold) has a more balanced sound with an enhanced low end. It still has a wide soundstage, but not as airy due to decreased level of brightness/sparkle. Low end now gets a nice sub-bass extension accompanied by a strong punchy mid-bass. Mids transform themselves with a little more body and feel a bit pushed back behind low end, but not in a recessed way. Lower mids are still on a thinner side, but upper mids are warmer and smoother. As a consequence of that, they lose some of the details in comparison to bronze filter, but do remain clear. Treble is crisp and bright, and has a nice extension though a bit attenuated in comparison to a setup with a bronze filter.

Since majority of my other IEMs are either balanced or have an enhanced low end, I figured for comparison I better use ED9 w/gold filter. Also, since I was going through so many different comparisons between ED9 with different filters and ATE and my other IEMs, the comments are relative to one specific headphone as noted below in comparison. Also, my IM50 has a silver-plated replacement wire from Lunashops.

ED9 (gold) vs VSD3: VSD3 has less sub-bass, brighter and leaner mids with a little more details, and actually upper mids/treble is a little harsher and grainy, a little better treble extension, and a soundstage with slightly less width.

ED9 (gold) vs KC06A: ED9 has a similar sub-bass but a bit less mid-bass, smoother mids (where I find KC to be a bit harsh/grainy), treble has a touch less extension and not as crisp, also ED9 has a wider and a deeper soundstage.

ED9 (gold) vs Pistons 2 (w/filter mod): P2 has more mid-bass slam, a bit deeper sub-bass, mids a bit brighter and harsher, and they have a similar treble.

EDSE vs ED9 (gold): ED9 has a very similar low end, smoother mids, a touch less of treble extension, and a similar soundstage. 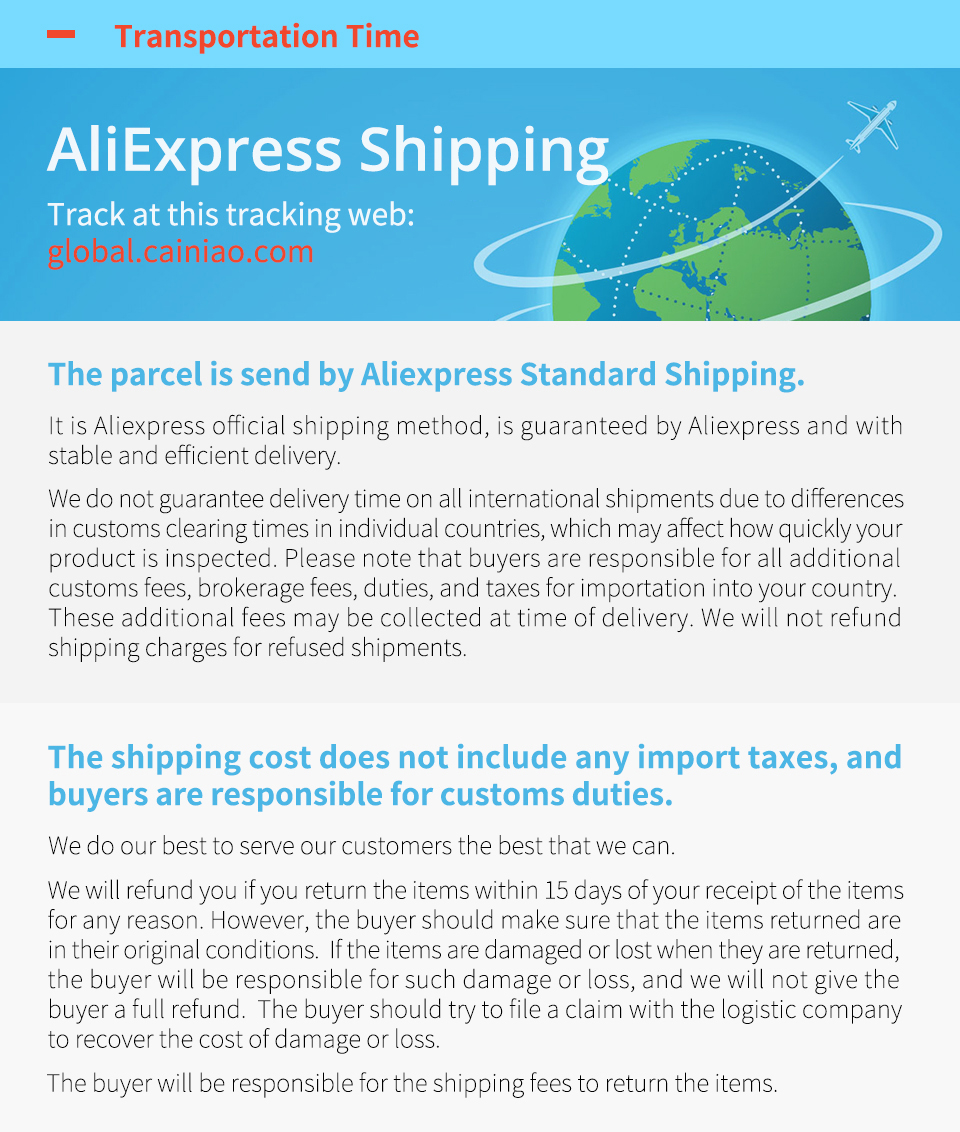 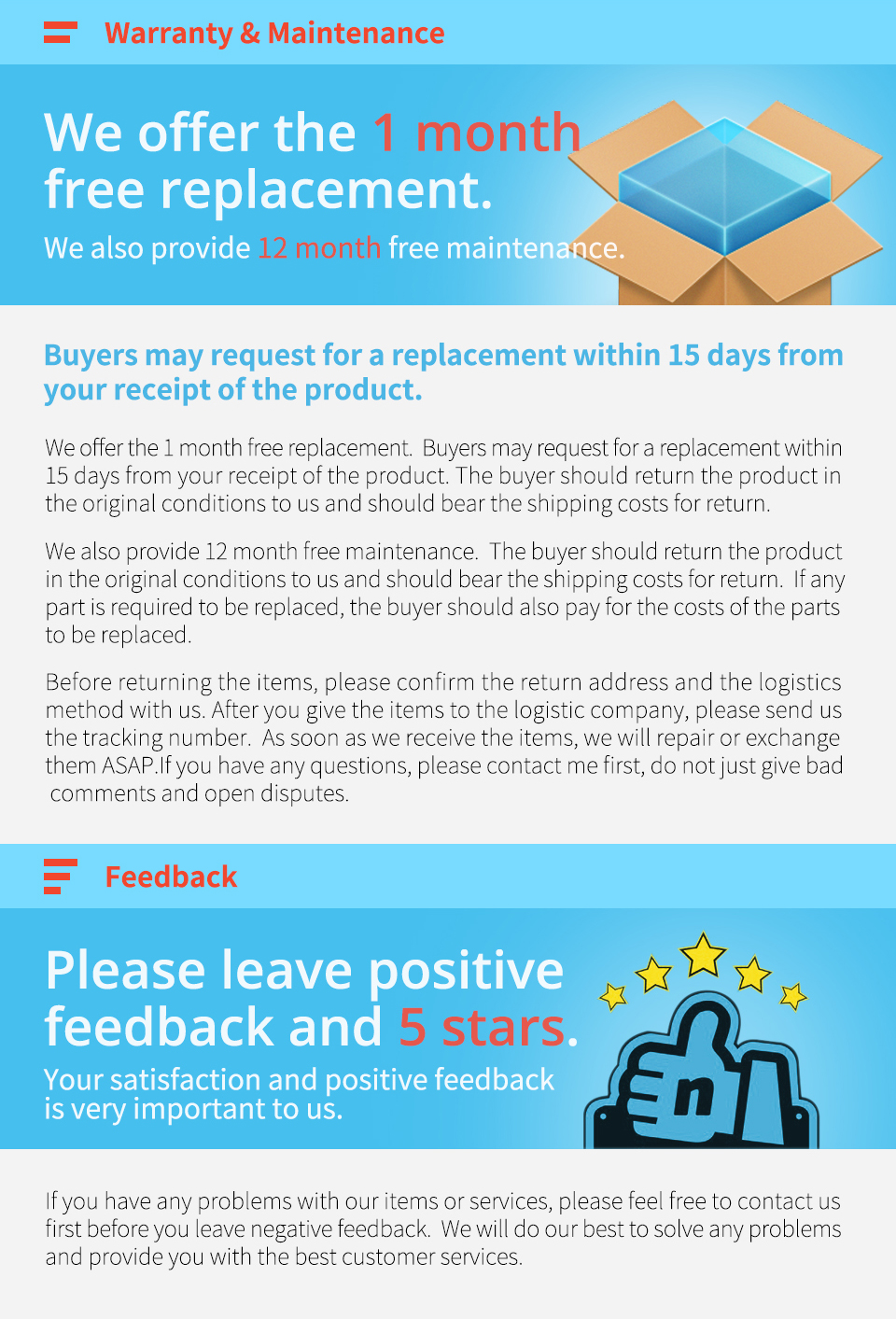